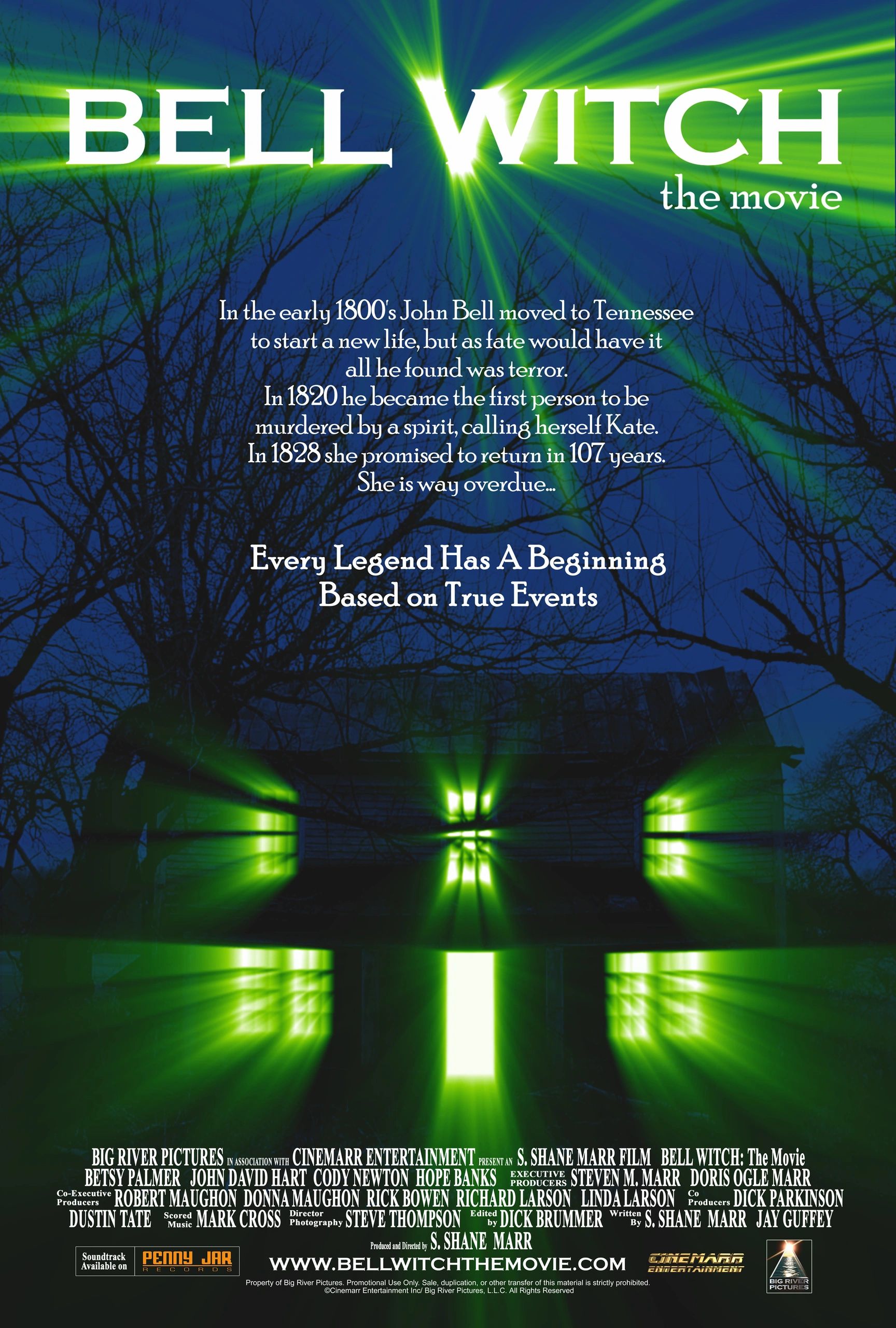 BELL WITCH motion picture is a legend about historic TN haunting in Adams.

In 1800s, John Bell  became the first  person to be murdered by a  spirit  as documented by the state of TN.

Based on true events.

A love story turns tragic when entangled with a legendary haunting in  BELL WITCH: The Movie. After stumbling across an ancient burial (in what  is now known as the Bell Witch cave), brothers John Jr. (Jeff Kunard)  and Williams Bell (Cody Newton) bring a strange curse home to their  family. Now their father, John (John David Hart), and sister, Betsy  (Hope Banks), experience phantom attacks in the night and strange  visions during the day. It is the Bell Witch. Nothing enrages her more  than Betsy's relationship with her loving fiance, Joshua Gardner (Todd  Geren). Their only hope of escaping is death...and the Bell Witch is  more than happy to help. Betsy Palmer (Friday the 13th) serves as the  voice of the Bell Witch.

Bell Witch Movie Closely follows the historically documented legend of  The Bell Witch of Adams, Tennessee, BELL WITCH combines a chilling  soundtrack of original and traditional Bluegrass and Americana songs  with sweeping, scenic images to create an eerie backdrop for this 200  year-old legend.

The motion picture is described as a love story turned tragic when  entangled with the legendary haunting of the Bell Witch. After stumbling  across an ancient burial (in what is now known as the Bell Witch cave),  brothers John Jr. and Williams Bell bring a strange curse home to their  family causing their father, John, and sister, Betsy, to experience  phantom attacks in the night and strange visions in the day. Nothing  enrages the spirit of the Bell Witch more than Betsy’s relationship with  her loving fiancé, Joshua Gardner. Their only hope of escaping the  witch’s torment is death…a fate the Bell Witch is more than happy to  deliver.

“With a proliferation of ‘slasher’ films filled with sex, violence and  vulgar language, it’s becoming harder than ever to find movies that are  appropriate for families while still providing suspense and fright,”  says Director / Producer S. Shane Marr. “We wanted to make a movie that  told the terrifying and true story of The Bell Witch and that stayed  appropriate for the widest variety of viewers.”

As with any motion picture, parents should review BELL WITCH: The Movie  before allowing their children to watch so that they may decide what is  most appropriate.

Rent or buy now on Vimeo

Sign up to get movie news and email notifications on special screening events.

We're here for you

Do you have questions or comments about Bell Witch the motion picture? Do you have a theater where we could arrange a screening? Send us a message, and we will get back to you soon.